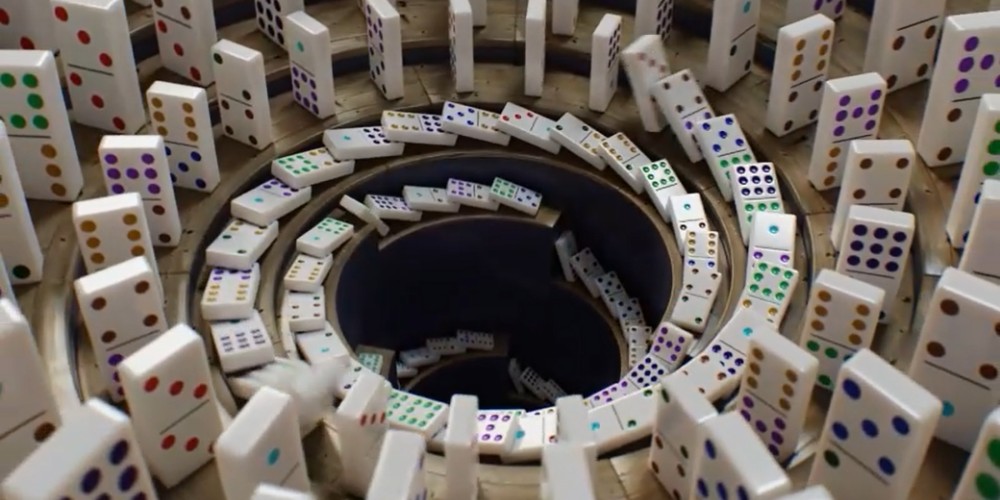 Jeremy Seeman creates physics-defying virtual worlds where marbles roll, wheels spin and dominoes fall endlessly forever. His mesmerising 3D animated loops hypnotically pull viewers in, tricking the eye with dizzying hyper-real optical illusions. We asked Jeremy why he started animating, where he gets his inspiration and what advice he has for younger artists.

Why do you create?

I just always have to some degree, and when it came time to make a career choice, I chose graphic design because I wanted a job where I could exercise my creativity on a continual basis. I have been a graphic designer for almost fifteen years.

“What I try to focus on is creating artwork that kind of breaks reality a little bit.”

I actually got into 3D art by accident. I was creating models in Blender to serve as bases for label mockups that I was making for fun. That was great for a while, but it started to feel like another job, like I was assigning myself freelance work to do that I wasn't getting paid for. So I stopped for a while. But being able to create whatever I wanted in 3D space was fun, so I decided to pursue that instead. The rest is history.

What makes your art unique?

What I try to focus on is creating artwork that kind of breaks reality a little bit. I do this by creating stuff that has semi-realistic qualities that move or transition in unrealistic ways, often using scale as a tool to do this with. The technique isn't novel or new, but I think I have pushed it pretty far and I think that's what I have started to become known for.

So far I have just been creating for the sake of creating. If a piece turns out nice I'll make an NFT out of it and hope to get a lucky sale. That's been a hit-or-miss approach, but I think that's the case for any artist. Sometimes you're hot or not, and sometimes the market is hot or not.

“...I am always thinking about what to create and how to animate it.”

I do however have plans for larger projects that will take a lot more time and focus to come into fruition. I don't want to reveal too many details, but one of them entails the adventure of an astronaut being sent into an area of space as an observer where physics don't make sense. Think of it as a digital storybook where each 'episode' or 'chapter' is a short written piece supported by a few animating graphics.

How do you promote yourself and your work?

This is one area that I initially struggled with because it falls into the marketing category for me, and it's not something I am super passionate about. I do like the genuine connections I make over social media, but it takes a lot of time and effort.

I've sold my work on OpenSea, Foundation and Rarible so far, but have work available on Fumigene, and Bubblehouse when they launch. I have a domain purchased for Kinetic Graphics, but I haven't had the time to put a website together yet.

Where do you get your inspiration?

I am inspired by math, patterns, nature and music. A lot of the time I'll be watching TV or cooking something and an idea will pop in my head, and I'll rush to sketch it down before it drifts away. I can't say exactly how ideas come to me, but I suppose it's safe to say I am always thinking about what to create and how to animate it.

What are your future ambitions?

I have two. The first is for Kinetic Graphics to be recognized as a 3D and graphic design studio. To get there will take a leap of faith because to pursuing a passion project could leave me in a tough position financially for a while. But, if it works out, the rewards will be well worth it.

“Criticism should be taken logically, not personally. Art is completely subjective...”

The second is to continue pushing my artistic vision, regardless of whether or not I am selling NFTs. I like to think of looping animations as their own artistic movement in a way, and I would like to be recognized as one of its prominent members. I have only been creating 3D animations since May this year, but it's a passion that I don't intend to quit pursuing.

Do you have any advice for younger artists?

Posting your work is intimidating, but nobody will know your talent if they don't see it. Self exposure over social media is a necessary step in establishing yourself digitally these days.

Also, be aware that toxic positivity on social media is a thing. A lot of this has to do with people clamoring for attention and being nice to everyone no matter what. Compliments on your artwork are nice, but it can sometimes come off as fake.

Criticism should be taken logically, not personally. Art is completely subjective and you will always find people that don't like it, and occasionally someone who tells you they don't like it. If they aren't just being a jerk, it might be nice to find out why.

“...just because you spent over a hundred hours on something, doesn't mean people will like it.”

I was recently critiqued on some music I wrote for a piece, but the guy was a music producer by trade so their critique is valid, even if it is still subjective. What I'm going to do now is get better at writing music that suits my artwork.

Lastly, just because you spent over a hundred hours on something, doesn't mean people will automatically like it. It's important to step back from your artwork once in a while and ask yourself if what you're doing works.


Huge thanks to Jeremy for his insights and advice. To see more of Jeremy Seeman's work, just visit the links throughout this article or follow him on Twitter and Instagram.
#art #design #designer #animation #animated #animator #3d #loops #looping #virtual #physics #math #mathematics #optical #illusions #music #musician #kinetic #graphics
< back to articles